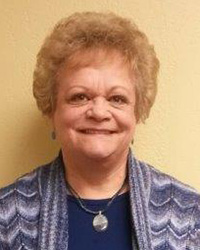 Sandy Rudolph lives in Fessenden with her husband Bill and is a representative of Fessenden 1st Lutheran Church. Sandy has been on the Board for three years and brings a wealth of experience and knowledge with her.

Sandy was born in FL the daughter of a Navy serviceman. Sandy said growing up she had to learn to get along at all places…she was always the “new kid” having attended 17 different schools in 12 years. She said growing up in big cities ‘you learn to be street smart’. Sandy loves life and says she’s ‘never met a stranger’.

Sandy worked almost 35 years with USDA (among other jobs), where she was instrumental in a big project getting records computerized, as one of many responsibilities/duties; and later moved to Washington DC where she had many wonderful experiences and was never afraid to venture out on her own. Sandy said she made a pact with God to use her while she was alone in DC, and some of her memorable experiences include volunteering for the homeless shelter outside DC – saying there were never enough accommodations…people end up homeless for so many reasons – circumstances beyond their control, and many just wanted someone to tell their stories to. She also volunteered at a group home – doing all the cooking twice a week, being a Sunday school teacher, choir member, and president of her Church Council, as well as conducting Bible Studies at a nursing home in Virginia where she said the residents really enjoyed one specific sermon she gave based on the song “This Little Light of Mine”. Sandy belonged to the GIFTS program with the Lutheran Church, is a certified lay preacher thru the Methodist Church, and has done many round-robin church services at area churches.

Sandy and Bill had planned on retiring in New Rockford, but took a detour – living in Nevada for a while before moving back to Fessenden where she is busy with her business called ‘Serendipity’ – designing and sewing doll clothes, being in Literary Club, Red Hats, altering clothing, and donating her time and talents to the community. She said she is definitely not bored, and also loves to cook, sew, crochet, knit, read, and play cards, and spend time with her 4 step-children, and grandchildren. When she gets involved…she gives it her ‘all’.

Sandy is happy to serve on the Lutheran Home Board of Directors, and LHGS is fortunate to benefit from the many experiences she’s brought to the Board. Sandy said she welcomes calls if she can be of help. Her phone number as 701-341-0108.

Donate to the LHGS Foundation Today!

Thank you again for helping us make a difference!

If you are interested in making a donation/memorial to LHGS please mail to:
LHGS Foundation Department
1226 1 st Ave. N.; New Rockford, ND 58356